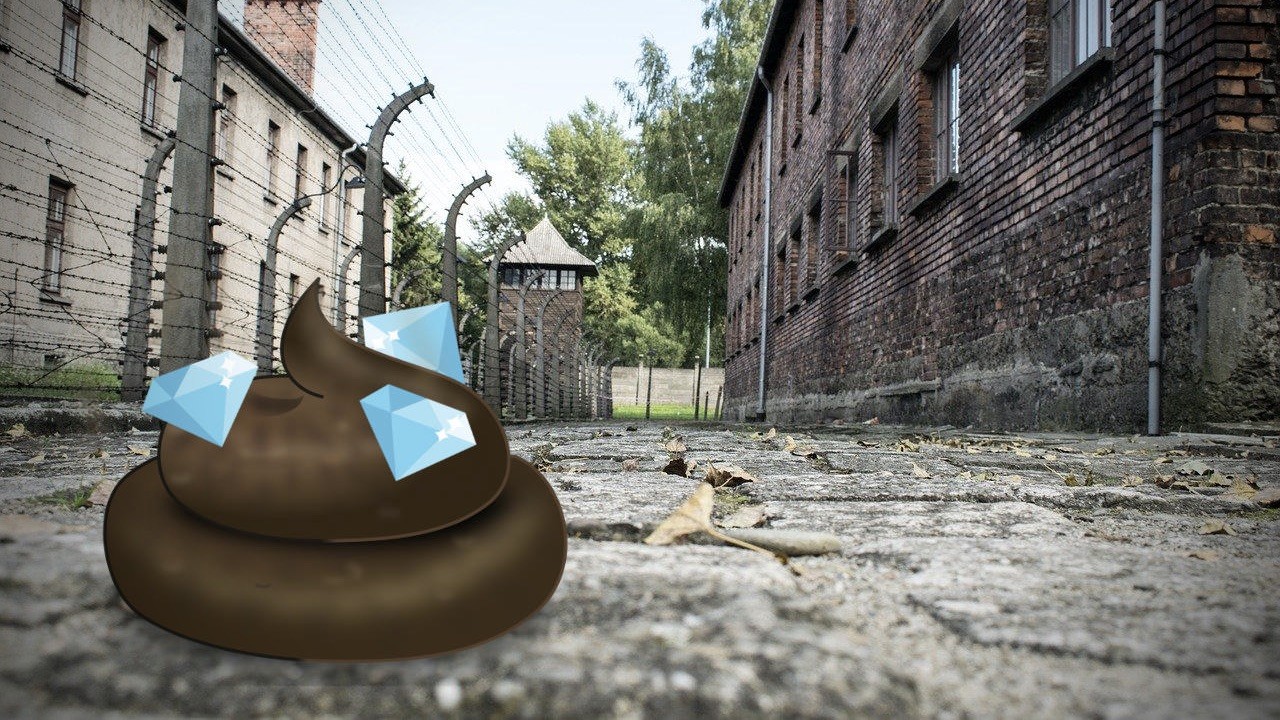 På side 33 til 36 i boken skriver Zisblatt følgende:

We women were directed inside the massive room and we were commanded to strip off all our clothing. One of the SS yelled, “Take your clothes and shoes off and hold them in your hands. Put your valuables in the bin.”

The SS men and women were holding big German Shperd dogs on leashes, and afraid that one of the dogs might attack me, I quickly began removing my layers of clothing. Slipping my skirt fron under my feet, I felt the slight bulge in the edging.

I quickly tore the hem and removed the small diamonds. Balling my hand into a fist, I held them tightly as I discarded my clothing.

Shivering and naked, I stood holding my mother’s diamonds. I was determined that these wicked men and women would never take my mother’s diamonds – the dignity of my family – from me. I moved into another area where my head was completely shaved. In the next section, I held out my arm and the number 61397 was tattooed on it. When I saw women checking for valuables in body cavities, I quickly popped the small diamonds into my mouth and held them under my toungue.

In less than an hour, I had been stripped naked, shaved and branded….but I still had hope that maybe I would find my family.

I panicked when I saw women workers removing fillings and crowns, pulling gold teeth. Although I didn’t have any gold teeth, I had my mother’s diamonds in my mouth. I knew that if the diamonds wee discovered, they would be taken away and I would be shot for not putting them into the bin. Impulsively, I gathered saliva into my mouth and swished the diamonds around to the back of my throat and out of fear I swallowed them.

“At least I still have them,” I thought. I knew that for the time being, the diamonds were safe.

After roll call the women were allowed to go to the la­trine.

There were lines for the toilet holes. I gagged at the stench, thinking I might vomit. My stomach lurched; I knew I would have to go to the bathroom before my turn, but that was suitable to me because I knew what I was going to have to do.

I ran over to a corner of the latrine, the pain in my bowels intensifying. When I was finished, I retched as I felt through my own excrement to find …one, two, three….finally four dia­monds.

I tore the end of my garment just a little and tied them into a small knot, keeping my hands curled around the small bundle. In spite of the smell, the filth, the miserable living conditions, a flicker of satisfaction burned in my soul. I still carried my mother’s diamonds, which to me were a symbol of my mother’s love and sacrifice. With desperate effort, I had to swallow and retrieve these diamonds again and again the entire time I was incarcerated.

Again I found myself marching to a train. We traveled to a place called Majdanek. At the station, we disembarked from the train and were herded through the streets of the city to the camp. SS guards yelled and dogs snarled as I hustled to my unknown destiny. I was careful never to look into the eyes of anyone, but I glimpsed people walking by us as I hurried with the other women.

The camp in Majdenek was, if anything, worse than Auschwitz-Birkenau.

Almost everyone had dysentery, but they were afraid to ask for help because of the fear they would be gassed. I shared one Koye (bunk) with ten other women.

The condition in the latrine was unbelievably dirty, but most of us culd not make it to the holes. Once again, in the latrine, i found my mother’s diamonds and salvaged them.

The en­tire time I was incarcerated, I would swallow and retrieve my mother’s diamonds again and again. It would have been much safer for me to throw the diamonds away, for I realized that I would not be able to buy bread, not even for diamonds.

Yet, the love and the strength that those diamonds carried were stronger than the Nazi hatred, and I was determined that I would keep them.

I saw hatred so strong when Mengele experimented on me and though my pain was unbearable, I saw joy when he watched me suffer. That kind of hatred existed in the twentieth century in Nazi Germany. When the SS packed the gas chambers with mothers, fathers, sisters, brothers, and grandparents, I was there.

På side 45 i boken skriver Zisblatt:

The Kaye in Majdenek was filled with feces, blood, and misery. I had no idea what the SS planned for me, but I knew I could not survive very long in this place.

Each hour was tor­ture…waiting…waiting. For what? So many questions filled my mind.

I heard whispers of lampshades…of beautiful skin. The rumor was that a lady named Ilsa Koch was choosing women with beautiful skin…to use their skin to make lamp­ shades. Lampshades! I would have never believed the pros­pect, but now…after what I had seen in the past two months… anything was possible.

After forty-eight immeasurable hours, I was one of an­ other fifteen girls chosen in a selection. Panic welling in the pit of my abdomen, I followed the guard with the other girls. I observed their unblemished skin. Could it be true that I was to become a lampshade?

When the train came to a stop, we realized that we were back in Auschwitz-Birkenau. We were immediately ushered into the barrack. At the next zeil appel Dr. Mengele chose me and four other girls and ordered us to go to the infirmary. There he put painful chemical injections in our eyes.

At first I thought I was blind. A nurse led us down steps into what seemed to be a very wet and cold prison cell. We stood shivering in this dungeon with water up to our ankles. We were afraid to speak, but we were in agony from the burning in our eyes.

After what seemed to be an eternity, the girl I had thought was so striking on the train spoke to me. Although I was unable to see her, I knew who she was because of her height.

I had come close to losing my mother’s diamonds shortly after the eye experiment. In the latrine, an SS had spotted me over in the corner. The SS detected me running my fingers through my own feces. I barely had time to grasp all of my precious stones before the SS kicked me and pulled me up by the collar. The SS screamed “Look at her. She is a nasty Jew. She belongs in the toilet. Throw her into the hole.”